The GT Platinum is four products in one remarkable unit: a vehicle engine tuner, monitor, gauge, and diagnostic device all in a single unit. The remarkable GT transforms the utility of your vehicle by increasing horsepower, improving fuel economy, and providing a comprehensive set of monitoring features and diagnostic functions. Other tuning products don't hold a candle to the Triple Dog GT - it has the largest feature set and the widest range of vehicle applications from a single product.

* Not legal for sale or use in California on pollution-controlled vehicles.

Monitor More Parameters
The GT Platinum Gas comes complete with a mount for on dash monitoring of a huge list of parameters.

Now With Custom Tuning
Stores up to 10 custom tune files created by your local Bully Dog / SCT Custom Tuning Dealer. *Not available for all vehicles

Accessory Delay
Control how long accessory items will remain on after the engine has been turned off and the doors remain closed. Accessory items include the radio, cigarette lighter, etc.

Auto Door Lock
Enable the vehicle to automatically lock all the doors any time it reaches a speed of 15 mph. Once the vehicle comes to a stop, if the driver’s door is the first to open, then all other doors will automatically unlock.

Auto Lock
Lock the doors when the vehicle reaches to a certain speed.

Auto Lock on Shift
Lock the doors when the lever is shifted from P range to a range other than P.

Auto Unlock on Shift
Unlock the doors by shifting the lever to P range from other than P range when the ignition is ON.

ECT Reset
This function is used to delete what the Electronic Controlled Transmission has learned.

Engine Fan
Enable or disable† the engine fan regardless of coolant temperature. (This feature does not take effect until the GT returns to the Main Gauge Screen.) † The coolant temperature light will not indicate if the vehicle begins to overheat when the fan is disabled.

Entry Delay
This will turn the Glass Break Sensor ON or OFF. This will change the Entry Delay Time, or the period before starting the warning, by the Passive Mode.

Fog Light/High Beam
Run the fog lights and the high beams at the same time.

Foot Light
This sets the time the Outer Foot Light is on.

Headlight Approach Timer
Adjust the length of time the lights remain on when a vehicle is unlocked using the remote control unit.

Headlight Delay
Set the amount of time that the head lamps remain on after the engine has been turned off.

Horn Chirp Length
Adjust the length of the horn chirp to either short or long when vehicle is locked using the remote control unit.

Horn Chirp on Lock
The vehicle horn will sound each time the doors are locked by a remote control unit while this feature is enabled.

Key Reminder Sound
This changes the frequency of the key reminder buzzer.

Key Reminder Volume
This changes the volume of the key reminder buzzer.

Light Auto Off
This will light the headlight for a time after the doors are closed with the ignition switch turned ON and the light control switch is at HEAD or AUTO and the headlight is ON.

Light Sensitivity
This adjusts the sensitivity of the lights automatically.

Light Time On
This function changes the time between when the doors are closed and the lights go off when the light control switch is at HEAD or AUTO, and the headlight is on.

Open Door Warning
If a door is open when vehicle is being locked by the wireless door lock, a buzzer will sound.

Optical Flash on Lock
The hazard lights will flash each time the doors are locked by a remote control unit when this feature is enabled.

Passive Mode
This will set the Theft Deterrent System in 30 seconds after the Driver door is closed and the Key is removed from the Ignition Key Cylinder.

PBD Buzzer
This function will adjust the volume of the buzzer while the PBD operates.

Police Mode
Allows the user to keep the interior and exterior lights off when door is opened and closed.

Pyro 1
A pyrometer (pyro) measures exhaust gas temperatures (EGTs); which can be used for defuel and warning level settings to help protect the engine from heat damage.

Pyro 2
A pyrometer (pyro) measures exhaust gas temperatures (EGTs); which can be used for defuel and warning level settings to help protect the engine from heat damage.

Smart Unlock Configuration
Change the way your vehicle unlocks when using a remote. Unlock only the driver door with the first button press and unlock the passenger doors by pressing the button again, or unlock all the doors at once.

Sunroof Action
This selects the opening direction of the sliding roof when holding the driver side door key unlocked for a certain time when the ignition switch is OFF.

Unlock All Door on Shift
Lock all the doors when the lever is shifted from P range to a range other than P.

Unlock Driver Door
Use the GT to disable this feature so all of your vehicle doors will unlock with one press of the button on a remote door lock unit.

Warn by Horn
This will turn the Glass Break Sensor ON or OFF.

Warning by Broken Glass
This will turn the Glass Break Sensor ON or OFF.

Wireless Auto Lock
This automatically locks doors after they are unlocked with the wireless key.

Wireless Auto Lock Time
This will change the amount of time from unlocking the door(s) with the wireless key to re-locking them automatically.

Wireless Control
This is used to turn the wireless door lock ON or OFF.

Wireless PBD Operation
This function changes the operation of the PBD by transmitter.

Zero Point Calibration
This function is used to calibrate the Yaw Rate Sensor.

What You Can Adjust

Adjust Timing
Adjust the timing of your engine from +4 to -8 to increase power or fuel economy according to your vehicle’s specifications.

Boost Control
Used to enable or disable the use of a specialized data table for turbo/ supercharged engines. (Enabled: Peak torque calculations take effect when the overboost timer has expired. Otherwise it would perform like a regular engine)

Idle Adjust
Enable and select a value for Engine Idle position. This is a great feature for keeping voltage in the vehicle up while running auxiliary electronics off of the vehicle’s power system.

Rev Limiter
Regulate the highest RPM that an engine can reach before the engine is electronically limited. Increasing the RPM limit is recommended only for racing purposes. Once of the most important ways to protect your engine from damage is to keep the RPMs from going too high.

Speed Limiter
Change the top speed that the car will reach before the engine automatically limits the power needed to go faster.

Tire Size
Correct the speedometer if you have changed your tire size from stock.

Transmission Shift Points
Change the RPMs at which an automatic transmission will change gears.

Wide Open Throttle Disable (WOT)
Remove the throttle position governor and use up to 100% of your vehicle throttle before you reach 40 mph.

No new arrivals to display 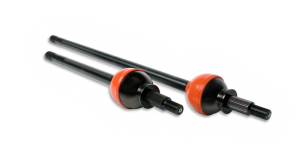